#amazing
#Heritage and culture
#To see

Not only an indispensable part of Morlaix’s museum, this is an architectural joy in its own right. Discover the fascinating story of these timbered houses, which can only be found here in Morlaix.

A story in the town

The town of Morlaix, inhabited from Roman times, was a simple fishing town back in the 12th century, becoming part of the Brittany Duchy in 1187. Prospering thanks to its active shipowners, it then fell victim to several invasions and attacks until finally, in the 16th century, the defensive structure known as the Château du Taureau was built to protect the bay – primarily from the English! The Grand Rue still shows traces of the rich medieval town that continued to prosper well beyond Renaissance times even though none of its buildings dates back earlier than the 16th century. It seems that from the 15th century Morlaix began to build houses of a specific architectural style that you don’t see anywhere else in Brittany and which became widespread – in this town at least – during the 16th century.

At the time, the merchants who thrived in Morlaix were linen traders specialising in fine linen that was a local speciality. The timbered houses built by these merchants had a smaller ground floor surface area that grew with each added floor, creating architectural overhangs that kept lower timbers and merchandise dry whilst avoiding excessive taxes (then based on the ground floor area of a house). 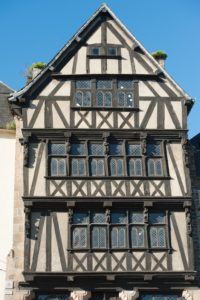 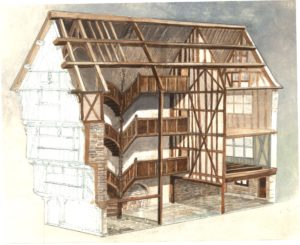 These ’Maison à pans de bois’ date from the first decades of the 16th century and have been recognised as Historic Monuments. The Maison à Pondalez, restored in the 1990s, includes one of the best-preserved Pondalez staircases in Morlaix. This, along with the Maison de la Duchesse Anne, presents one of the most significant remains of an architectural style that is specific to this town.

The Maison à Pondalez is in itself an historic monument and is a 16th century timbered construction. An immense granite fireplace and spiral staircase make bold statements in its vast central space. Set over 4 floors, the works and artefacts of the collection housed here bear testimony to the daily life of Morlaix’s inhabitants, architecture and history.

The inner construction has become symbolic of Morlaix: one façade leads off the street while at the back there’s another staggered building giving onto a garden or ramparts and, in between the two, an interior courtyard called the ’lanterne’.

A large stone fireplace with intricate mouldings took up one of the middle walls, and opposite this in a corner of the open courtyard, there would be a winding staircase to which several passageways were attached, allowing people to move easily between the two parts of the house. The staircase was often sculpted, carved with an image of the Parton Saint, protecting the family of the proprietor. 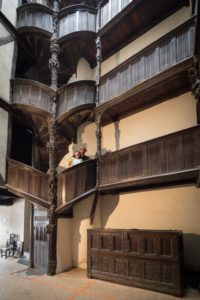 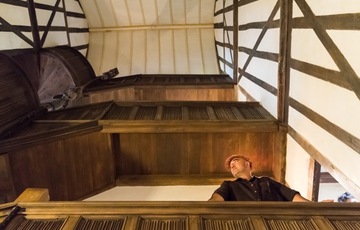 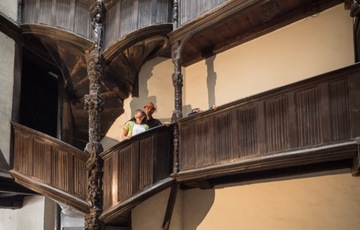 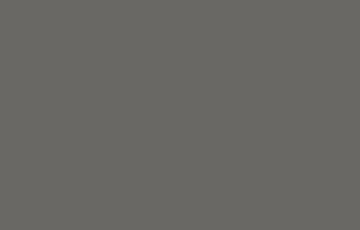 Be careful : The Morlaix Museum : Les Jacobins is currently closed for renovation works.

#To see #To do #Heritage and culture

Step back in time in Morlaix Bay

#To do #Heritage and culture #amazing #with kids

All aboard for Brittany’s Alcatraz!

#To do #Heritage and culture #amazing #with friends

Barnenez Cairn, a burial chamber older than the Pyramids

#To see #Heritage and culture #amazing #with friends